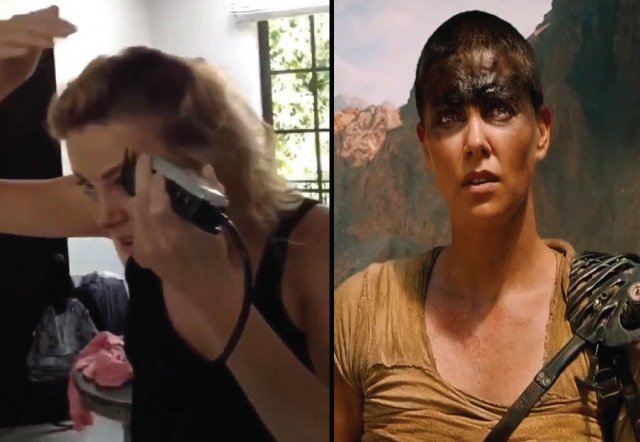 This July 31, Charlize Theron released a video showing her shaving her hair, herself, for the part of Furiosa in Mad Max: Fury Road. Here are photos that the fans of the film would appreciate!

Mad Max: Fury Road is one of the cult classics movies of the last ten years. Charlize Theron and Tom Hardy had to work under very difficult shooting conditions on the bill for this enormous success.

A tension that stopped the two actors from speaking at the time: ” I think that because of my own fear, we were barricaded to protect us instead of talking to us and saying: ‘ It’s scary for you and it’s scary for me too. Let’s be nice to each other, ”  Charlize Theron said on May 12 in an interview with the New York Times, before Tom Hardy confessed to thinking the same thing: ‘It’s a little strange.

A film that they are far from regretting, as has been appreciated by critics and the public.

It is therefore with great pleasure that Charlize Theron has announced that her organization, which works to protect the younger generations in Africa, is organizing a large-scale screening of George Miller ‘s film. In the midst of the health crisis, distribution was carried out on the basis of the ‘driving-in’ principle, that is, by means of distribution that everybody would attend from their vehicle.

In honor of this event, here is the video showing the beginnings of the creation of Furiosa (the character she acted in Mad Max: Fury Road, editor’s note)! (…) So excited to see this film again on the big screen ! “, she posted on Twitter in the caption of the video, Sean Penn’s ex-girlfriend appears naturally, shaving her blonde hair alone, using an electric trimmer.

A moment that remained hidden until July 31 and which shows once again to what extent the Hollywood star is a practitioner of physical transformations for her numerous roles.

In honor of our @CTAOP drive-in screening of #MadMaxFuryRoad tonight, throwing it back to the point of no return with creating Furiosa. A huge thank you to @TheGroveLA and @ChadHudsonEvent for making tonight happen! So excited to see this movie on the big screen again 🚘🍿🎥 pic.twitter.com/tIZzRw64Gv

African Man Gets Punished For Allegedly Raping An Under-aged Girl By...