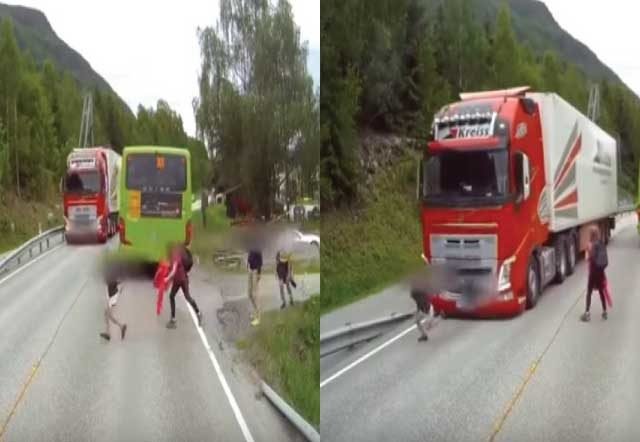 This is the terrifying moment a young boy was nearly crushed to death by a huge lorry after running across the road without looking in Høyanger, Norway.

The Heart-stopping dash-cam footage shows the boy getting off the bus with four other kids. While others waited at the side of the road, the boy ran into the road without looking.

As the driver in the red and white lorry coming in full speed, spotted the youngster who had no idea what was coming towards him, he forcefully applied the breaks, coming to a stop just inches from the panic-stricken boy.

According to reports, the footage was shot on June 19 this year by truck driver Tor Bjørn Kyrkjebø.

Speaking to NRK, the Truck driver, Mr. Kyrkjebø said:  ‘I saw what was about to happen, but there was little I could do.’

‘I saw over the roof of the bus the truck was heading at him at a great speed. I blinked my lights and horn to alert the traffic and young people.’

Mr. Kyrkjebø added that the near-miss was ‘horrible to see’.

According to him,  he released the dash-cam footage to warn children about the dangers of busy roads.

Watch the heart-stopping video below IN NEXT PAGE