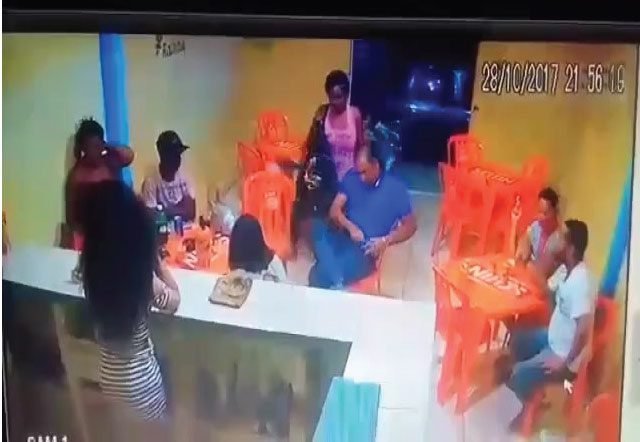 A very shocking and video shows the moment a man retrieved a knife from a bag handed to him by a woman and stabbed another woman in the back with it on October 28.

The incident happened on Saturday night in a restaurant in the city of Coração de Maria, 105 kilometers from Salvador, Brazil. The victim is 34-year-old Olinda de Jesus Conceição.

In a footage of the incident, Olinda is seen sitting and so was her attacker identified as Beto. Soon, a woman comes into the restaurant with a bag and hands it to Beto. Beto rumages through it calmly, pulls a knife and stands, then goes to where Olinda is seated and stabs her in the back in the presence of people, including children.

Others in the bar were shocked and ran out. The children also ran out in shock. The woman who gave Beto the bag then walks up to him to stop him from carrying out further attack while the injured woman is writhing around in pain. Beto calmly walks away unrestrained following the attack as his victim bled at the back.

According to reports, Beto killed Olinda because he believed that she influenced his separation from his ex-wife.

“We were informed at the scene that he [Beto] killed the victim because she welcomed his ex-partner after the end of the relationship. The motive was revenge. We are trying to identify this ex-partner,” said Sérgio Araújo, head of the Delegacia de Coração de Maria.

According to Araújo, Beto acted with the help of his current girlfriend, that is the woman who handed him the bag with the knife. Beto reportedly threatened witnesses before leaving the bar. He told them that he would kill anyone who spoke. Then he and his girlfriend fled in a black Chevrolet Corsa Classic that was parked in front of the bar.

“He said that if anyone told anything, he would come back to slay everyone. He is violent, even walking with a firearm,” said delegate Sérgio Araújo.

Beto is currently on the run. Araújo revealed that Beto was already wanted for cases of drug trafficking and homicide before he killed Olinda. He does not reside in the city, but often goes to visit relatives.

“He’s outlawed, I think he’s under arrest warrant [another crime]. We will still confirm with the Justice, “he added.

The deceased, Olinda was single and left four children, two 14- and 16-year-olds, and two children, 11 and 4 years old.

Watch the video of the attack below in next Page!.