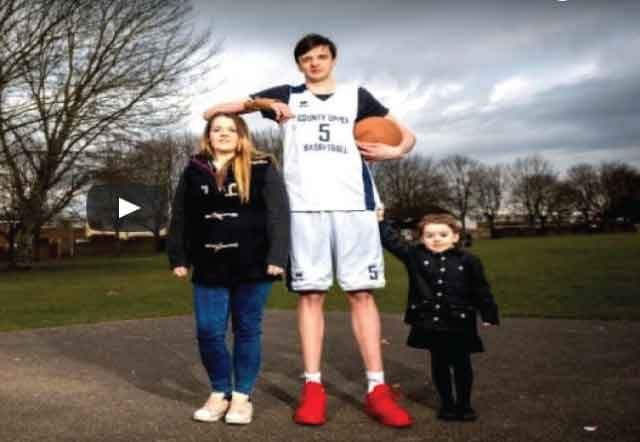 A British 16-year-old has had a growth spurt standing at an amazing 7 feet 4 inches – and counting.

He is currently the tallest teen in the world, Brandon Marshall, from Bury St Edmunds in Suffolk, is still growing. Impressively, he’s also just been picked for the Welsh national basketball team.

randon’s mum, 49-year-old Lynne Quelch, said: “I can’t believe he’s still growing. It is crazy, walking down the road with Brandon. People stop him, asking for photos with him. To be honest I don’t know what height he is going to reach.

“He is so shy as well, bless him, he is so introvert. When people notice his height, he says, ‘Oh, here we go again, yes I am tall. Yes, I am Britain’s tallest teenager.'”

Brandon already became Britain’s tallest teenager last year when he grew to 6 foot 11 inches. However, he’s now grown another five inches and is now believed to be the tallest in the world.

The previous holder of the record was Broc Brown, a 7′ 8″ American teen who turned 20 last year.

Brandon said: “I was normal size up until the age of nine. I then had a big growth spurt. I was about six foot when I was about 13 and I started to grow a lot more by then.

Also Read: Increase Your Height with These 10 Stretches And Exercises Today

“When I was in Year Nine I got to 6′ 7 ” and in Year 10 I got to seven foot. Shoes have always been a problem because I will never be able to find them and they are really expensive.” He Also Eats 8,000 Calories A Day

Brandon does come from a fairly tall family – his mum is 5′ 11″ and his dad is 6′ 10″ – but he isn’t challenging the national or global tallest man records yet.

Currently, the tallest man in Britain is Paul Sturgess, who stands at 7′ 7″, while the world’s tallest man is American Robert Pershing Wadlow who is a whopping 8′ 11″. At this rate, Brandon could still beat them yet.