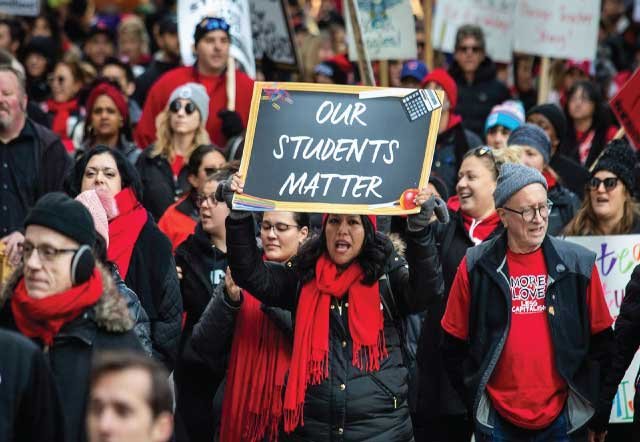 One of the largest teachers’ unions in the United States has mobilized its representatives to strike if their schools intend to reopen during the pandemic without appropriate security measures.

The American Teachers’ Federation, which includes 1.7 million school employees, has released a statement Tuesday, which states that it will endorse any local branch that wants to strike for the reopening of plans. The group argued that school buildings should only be opened in places where coronavirus infections are small enough and where schools enforce such safety measures.

In announcing the measure, the union leader condemned President Donald Trump for demanding the re-opening of schools amid the red hot spots of the virus. Randi Weingarten said Trump ‘s response was “chaotic and devastating,” leaving teachers angry and terrified.

“We will fight for the health of our students and their educators on all fronts,” Weingarten said at the annual conference of the organization. “But if the authorities do not protect the safety and health of those we represent and those we serve, as voted by the executive council last week, nothing is ruled out.”

The Union leaders endorsed the resolution on Friday but revealed it on Tuesday at the Community Meeting, which is being held online as a result of the pandemic.

The nation’s largest teachers’ union, the National Education Association, has announced separately that its members will do “whatever it takes” to protect students.

For weeks, Trump has been calling for the complete reopening of the country’s colleges. Last week, he admitted that several schools would have to postpone returning to face-to-face classes, but he also urges Congress to withhold potential virus relief packages from non-open campuses.

Several of the nation’s largest districts have agreed to launch their school year online, like Los Angeles, Atlanta, and Houston.